A little personal indulgence and side-track...

I have been a member of the Talyllyn Railway Preservation Society since 1985 and a Loco Department volunteer since 1990. I was made up to Passed Cleaner in 1992 and have made regular visits ever since, although since moving North in 1997-8, I have not had as many occasions to get there as I once did. Marriage and children meant that the TR took a back seat actively until the last couple of years when I have made a bit of a practical comeback! I had 3 weeks in Wales this year, with several days booked on the footplate. On a beautiful July afternoon I was on a firing turn with Terry Gurd driving, and this was the view from the footplate of No.2 "Dolgoch" climbing Cynfal bank, with Cader Idris in the distance. 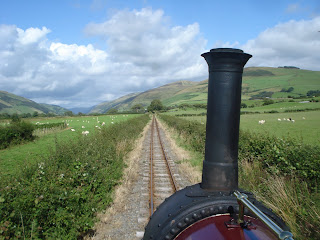 Whilst nothing to do with work, today was the annual Drivers' Meeting where all loco department volunteers are assessed and promotions made, cleaner to passed cleaner, fireman to passed fireman, and so on. I was delighted to hear this evening that I have been made up to fireman grade, subject to a rules exam (funny, I only had one at Easter this year!), so two promotions in a weekend is really rather special! 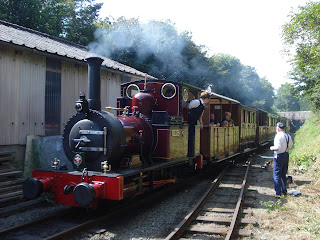 Of course, a major piece of TR current concern is No.2 "Dolgoch". Her boiler has now expired and a major fundraising initiative is under way to reboiler and overhaul her in time for the 60th anniversary of the railway opening as a preserved line. The loco's significance has been well documented in the railway press recently but if any readers would like to help the appeal in any way, please look at: http://www.talyllyn.co.uk/dolgoch-appeal . The picture above shows No.2 drifting through Pendre yard, slowing for the token exchange in August 2009.
Posted by Anthony at 13:54 No comments:

A long day closes...the ups and downs of railways

Well, more report writing this week, meetings and visits to and from folk. Discussions of new loans, new books, sharing colleagues in other museums joys and frustrations and assisting with advice on loco restoration projects. All part of another busy week, along with the need for me to learn Microsoft Project, which will be a challenge for techno-numpty me! Richard Pearson, Shildon's Workshop Manager has been to Tyseley to collect the last bits of Duchess of Hamilton left over from the streamlining and has worked very hard with his team this week over some unsociable hours - and today has been no exception.

And so to Friday, Richard and the lads set off by road to York to take Orion, the 9 1/2" gauge Ebb Compound loco model owned by the Stephenson Locomotive Society, down to York for their centenary dinner in a couple of weeks' time and assist with the major task of the day of which more anon.

I went by train, and it was delayed outside Darlington and arriving into the station we were told the train would terminate there due to a derailment at the south of the station. On the adjacent track was a Network Rail train headed by this yellow class 31. I presume this was part of the breakdown gang or to do with assessing and repairing damaged trackwork. Every train was otherwise passing though platform 4, in both North & South directions and a delay ensued. My train to York was only 7 minutes late though, giving me just enough time to spot the derailed train just at the end of platform 3 - I am told it had passed a red signal and fell victim to the catch points. 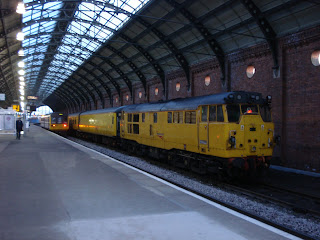 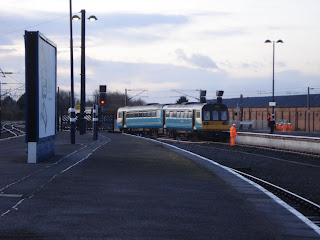 Eventually arrived at York, still in time for my 9am meeting to check out potential cab access to the streamlined Duchess for next year, then down to the store to unload "Orion" and just for a while, it's stored alongside a 9 1/2" gauge Great Northern Atlantic. Hope they don't breed! 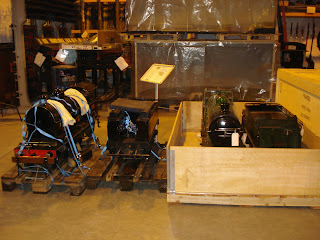 Outside, Richard, Johnny and Jason were assisting Ray Towell, Duncan & James Milner to load the Great Northern tender that has been in store for the Stirling Single loco. It has deteriorated badly over 40 years in store, and has been moved this afternoon to Shildon, where we will move it inside this next week for assessment for future restoration to display it with the loco (which currently is paired with an 1850 Sturrock designed tender). This picture shows it being manouevered by crane and lorry to the loading position. 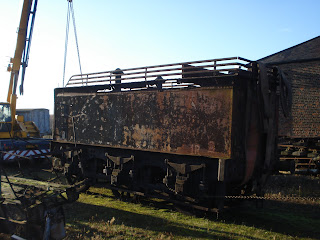 Once the tender was loaded, a quick cup of tea to thaw out before an important meeting, which I walked out of to see "Tornado" leaving light engine and van from platform 10, having just brought a train up from King's Cross. I love the lighting at this time of year if it works right! 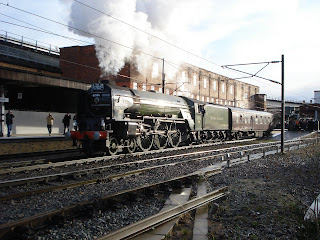 We very much hope that "Tornado" will grace Shildon with its presence in 2010, and talks have begun. A final note from today on a personal level - the lunchtime "important meeting" alluded to above was an interview for the position of Senior Curator of Rail Vehicle Collections - and I'm delighted to say that all went well and I have been appointed thus on a permanent basis, starting on Monday!

You can read this post at its new home in the official National Railway Museum blog.
Posted by Anthony at 06:16 1 comment:

You can read this post at its new home in the official National Railway Museum blog.
Posted by Anthony at 13:48 No comments:

We will remember them

You can read this post at its new home in the official National Railway Museum blog.
Posted by Anthony at 12:49 No comments:

A day with the Director (elect)!

You can read this post at its new home in the official National Railway Museum blog.
Posted by Anthony at 14:03 No comments:

You can read this post at its new home in the official National Railway Museum blog.
Posted by Anthony at 08:25 No comments:

You can read this post at its new home in the official National Railway Museum blog.
Posted by Anthony at 12:07 No comments: