Yesterday we headed for Toddington for a full day of Great Westernry - and were not disappointed! As well as the operating railway, there were several extra displays, from model railways to road vehicles and seemingly everything in between. A major exhibition was of Great Western and Western Region railwayana organised by Neil Booth of Railwayana Auctions Limited, including a full set of Western shedplates and many items never displayed in public before. 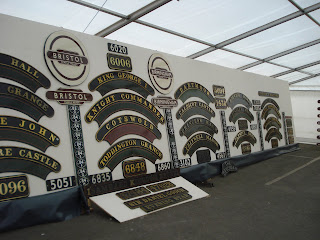 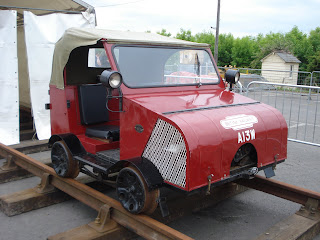 Whilst in another marquee is our replica broad gauge loco "Iron Duke". 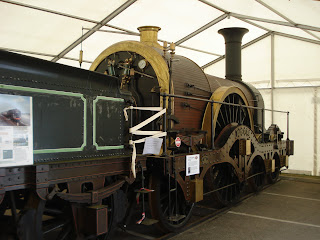 Due to the unfortunate landslip between Gotherington and Cheltenham, services ran to Gotherington only, plus an auto-train ran northwards from Toddington over Stanway viaduct on the extension towards Broadway - of which more later. Here's the Auto-train in platform 2 of Toddington station. 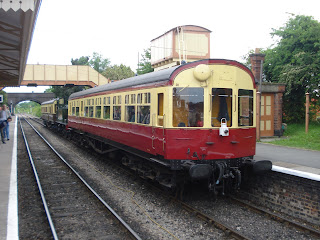 We travelled the line as far as Gotherington, where the former station is now a private house, belonging to Bryan and Sunita Nicholls, who had very kindly opened their gardens and collection of railwayana for the festival. Before we had a look around, 9466 was caught banking the train we arrived on out of Gotherington back towards Winchcombe. The restored station can be seen on the left. 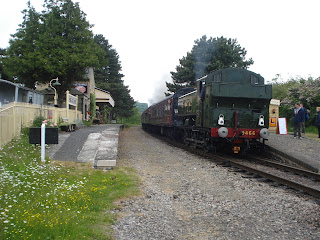 Bryan has amassed a superb collection, but displays it in context - including a short length of line with a classic GWR Pagoda halt platform and building at one end, known as Gotherington West. For the duration of the festival, steam operation on this line took place for the first time on record, using the Gwili Railway's RSH 0-4-0ST "Olwen" made up as former Swansea Harbour and GWR loco 1144. In this picture, the atmosphere of Bryan and Sunita's garden can be seen as "1144" prepares to take us on a short trip to Gotherington West. One of the real gems of the festival, and the Nicholls are to be thanked for taking the risk and opening their garden to so many visitors. 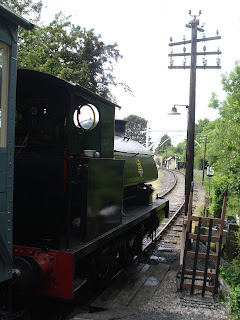 In a marquee in the garden are a selection of railway road vehicles and a couple of displays, this pair of Scammell Mechanical Horses remind us that the story of railways and goods went beyond the rails. 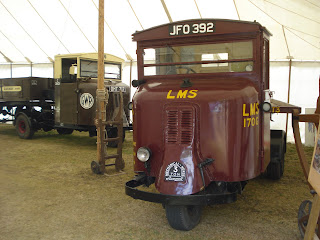 A star turn for many was the debut of the former Turkish Railways LMS 8F, allocated LMS number 8274, but appearing as 8476, a Swindon built example, showing how the 8Fs were built in the workshops of all the big four railway companies during the Second World War. It is seen here taking water at Winchcombe. 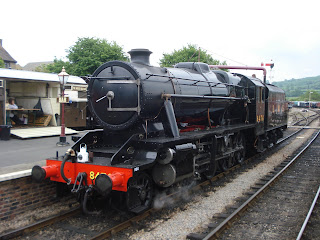 In the station yard at Winchcombe was an Aveling & Porter steam roller with railway credentials. Owned now by Nigel Keene, this is the famous roller that took part in the duel with 1401 in the film "The Titfield Thunderbolt". 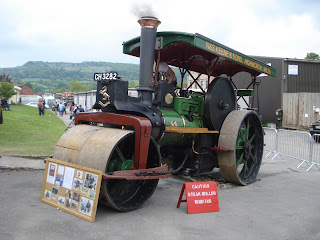 Moving back to Toddington, 9466 arrives at Winchcombe to take us North. 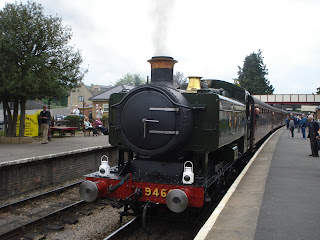 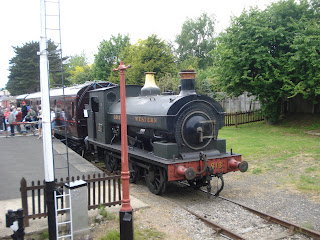 Back at Toddington, we took a short ride on the North Gloucestershire Narrow Gauge Railway to Didbrook loop. The train paused at "California Crossing" on the way down, headed by a Hunslet diesel. 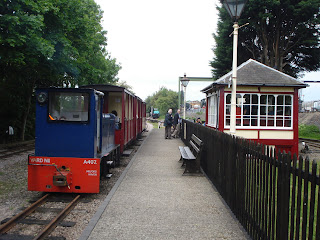 Due to a track problem, we were then taken back to Toddington by steam, this being a Feldbahn type 0-8-0T, a very pleasant extra to the afternoon. 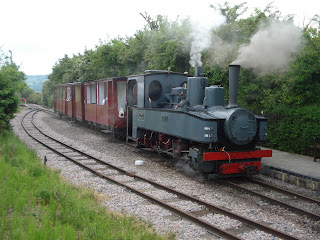 Another of the marquees at Toddington included the most incredible display of large scale GWR locomotive models, the biggest of which was this amazing 10 1/4" gauge 47XX 2-8-0, something I'd never seen modelled in live steam before. 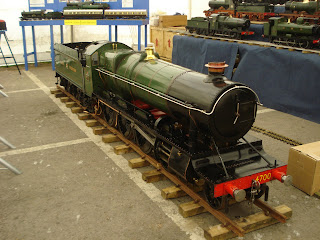 In the yard at Toddington, another exhibit had been shunted into place, this being the pioneer GWR gas turbine loco, 18000, jokingly known as "Kerosene Castle". 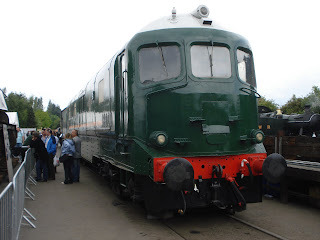 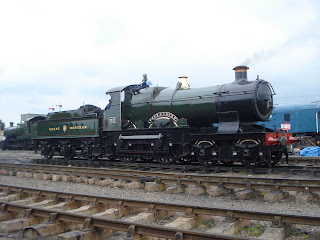 A particular highlight for me was the granting of a footplate permit for use during the day, thanks to Andrew Goodman of the GWSR. Time did not allow us to take it up on a full line trip, so instead, a ride was arranged in an autocoach on the auto-train over Stanway viaduct, and here the driver eases open the regulator in the leading coach of the train, controlling 1450, the auto-fitted tank loco behind us. 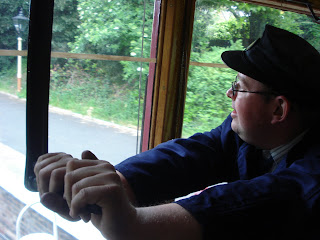 And the view out of the driving compartment as we head north over the viaduct towards Laverton. Notice the immaculate permanent way. 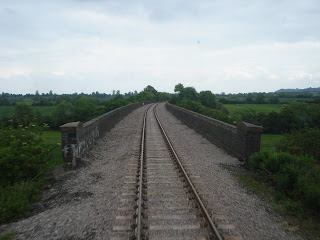 Back at Toddington, there was time to see another visitor being watered, GWR Mogul number 5322 which saw service in France on the First World War, and recently overhauled at Didcot to wear the Railway Operating Division khaki livery. 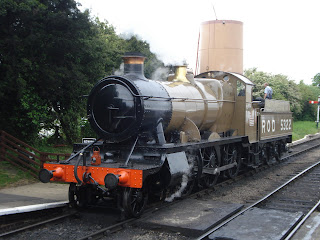 One could not of course have a celebration of all things Great Western without a nod to the man who started it all, Isambard Kingdom Brunel - seen in front of 5051 "Earl Bathurst", which is carrying the "Cheltenham Flyer" headboard. 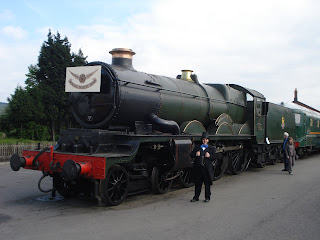 Next to the Castle and 18000, the ex-Barry condition 3845, giving a very vivid idea of what work has had to be undertaken to restore the majority of the stars of the Festival to operation after years in the South Wales scrapyard. 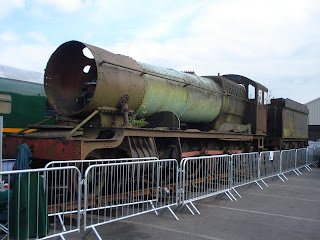 A nice touch was the GWR saloon in the yard, offering manicures etc should they be required! 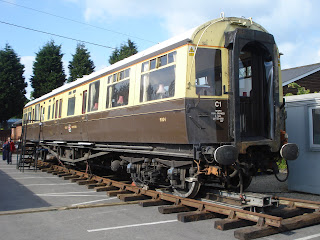 My last picture shopws the final departure of the day, pannier tank 4612 making a spirited depature from Toddington with another well-filled train, giving pleasure to hundreds as evidenced by the photographer in the foreground. What an event, well done GWSR! 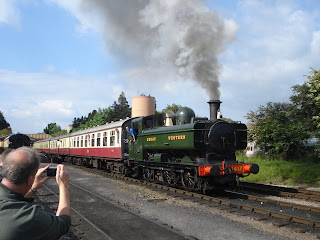