A morning with Hefin Owen and Wild Aster

At the suggestion of Julian Birley who was on the Welsh Highland train yesterday, I made my way back to York today via the Llanberis Lake Railway where I found 1904 Quarry Hunslet "Wild Aster/Thomas Bach" raising steam. The loco's second name is in honour of a former driver at the quarry "Little Thomas" rather than any engine with a face on it! 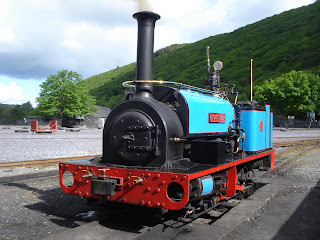 Its regular driver is Hefin Owen, son of a Dinorwic Quarry loco fitter - the railway nestles in the shadow of the quarries - and through the good offices of Julian, it was arranged for me to accompany Hefin on a 9.50am special extra departure. Hefin is here watering the loco at Gilfach Ddu station. 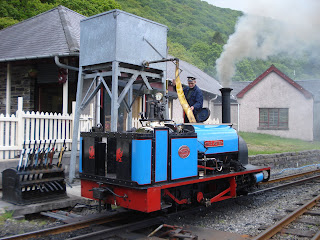 Some seven years ago, the line was extended to Llanberis village, giving the railway a much needed shop window on the main road, and diverting off the trackbed of the former Padarn Railway which it follwed along the lake. "Wild Aster" is seen here about to cross the main access road to the Padarn Country Park complex, which includes the Welsh Slate Museum, part of which can be seen on the right of the picture. 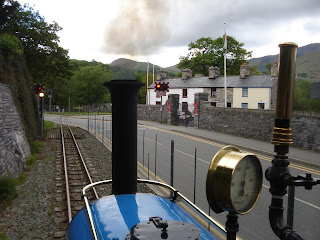 Runnig back to Gilfach Ddu along the lake shore, it can be seen again that Snowdon is in cloud as it was yesterday. That said, the view from Hefin's "office" is particularly fine and his company was very enjoyable - it's a lovely railway and a very unexpected experience, diolch yn fawr iawn Hefin. 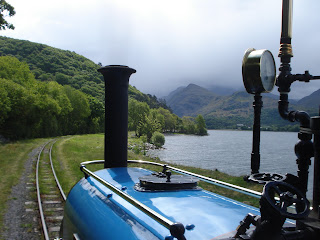