Take me to the Bridge

Yesterday was a momentous day for the Welsh Highland Railway, opening the line to Pont Croesor from Hafod y Llyn and now giving over 20 miles of line from Caernarfon and leaving only 3 more miles to open to get through to Porthmadog. Steve Davies was unable to attend and thus I was asked to represent the NRM. This was a particular delight for me as a narrow gauge enthusiast and also as I had yet to travel on the Welsh Highland line beyond Waenfawr. Our special train left Caernarfon at 10am and was hauled by Garratt 87, seen here rounding the curve into Rhyd Ddu station. 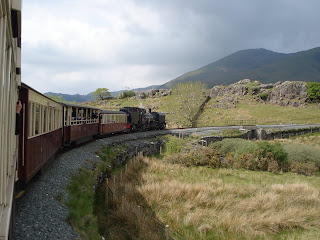 We paused at Beddgelert to pick up local VIPs and prepare to journey through the Aberglaslyn Pass, one of the spectacular parts of the line. The concrete pillars in the middle of the picture are the supports for the old water tank from the days of the original Welsh Highland line. 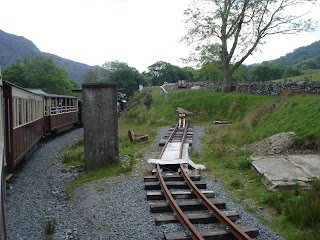 At Pont Croesor station, we were welcomed by schoolchildren and shortly after, the station was opened by Dr Dewi Roberts, seen here with the microphone, alongside John Prideaux of the Festiniog & Welh Highland Railway Company. 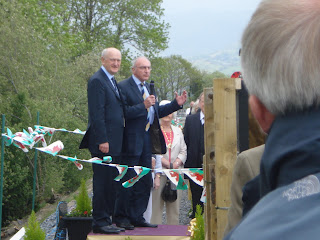 Travelling back to Beddgelert, we paused at Nantmor for Dr Dafydd Gwyn to open the station there and dedicate it to the memory of the late Dr Ben Fisher, a staunch supporter of the railway project and maintainer of an excellent website devoted to the railway. 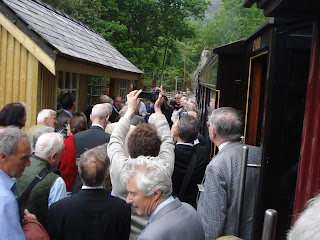 As the train exits Aberglaslyn Pass on the way to Beddgelert, it crosses the Brynfelin bridge, a sympathetic replacement of a 1920s original and a classic location. 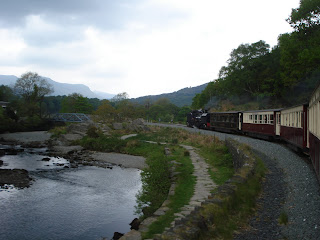 Guests were treated to an excellent buffet at Beddgelert's Royal Goat Hotel, after which I nipped up to the station to have a look at 87 before the crowds returned. 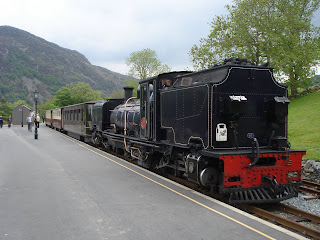 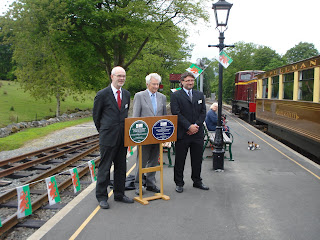 Dafydd Gwyn invited me into the observation car for part of the return journey to meet representatives from Gwynedd County Council and Dr Dewi Roberts amongst others, a very sumptuous experience. 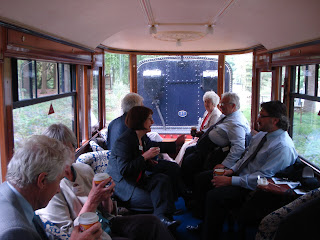 Leaving Rhyd Ddu, we rounded a curve beneath slate tips, and Snowdon hiding in the cloud - for once I was glad I wasn't up there! 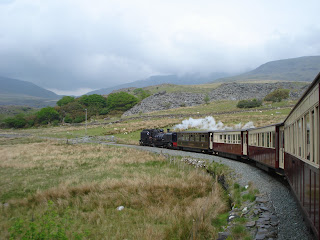 Returning to Caernarfon, we noticed newly overhauled Garratt 138 outside the shed at Dinas in light steam - so we drove back to the yard to have a look - and very nice it is too! It'll find its niche on the newly extended railway... 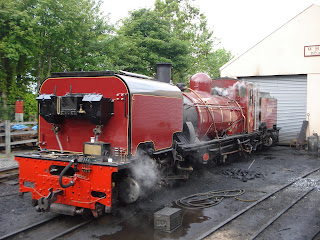 Also in the station yard at Dinas is this little 3 foot gauge De Winton loco "Llanfair" built in Caernarfon for the Penmaenmawr Granite Quarries - I have a very soft spot for these locos and the De Winton company in general. 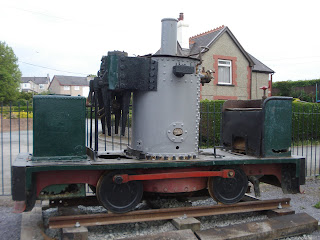 In a bay platform at Dinas was pioneer Beyer Garratt, K1, undergoing maintenance before rejoining the working fleet. 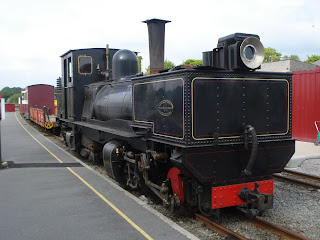 Finally in the top yard was this pair of modern diesel locos, obtained for permanent way and maintenance use, but I was unable to find a manufacturer for them or anything about where they had come from. They look to be very useful engines however! 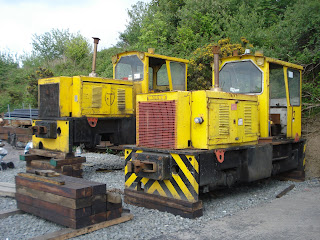